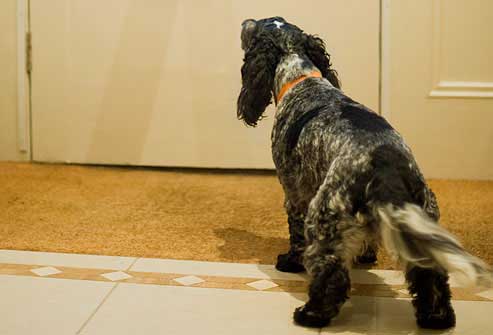 Marcy and Dave are having guests over for dinner. Their dog Sophie barks ferociously every time she hears the doorbell, and rushes the door. Dave has to hold her by the collar as he opens it so she won’t rush out or jump on people, and she’s fairly large, so it is a bit of an effort. She continues to bark, teeth flashing, as the people enter, and the hair stands up on her neck and rump. Once the door shuts, Dave releases her, and she investigates the guests with a stiff stance and full sniffing, standing stock still, sometimes looking right at their faces. Some guests also elicit a low growl from her; Dave admonishes her to “knock it off.” After a minute or so, the guests relax a bit and move into the home. Sophie stays very close, hackles receding slowly. She resumes her nervous pacing near the door to await the next “intruder.”

Marcy and Dave ignore her mostly. If you asked them, they’d say she is harmless, and just making noise. She’s never bitten anyone, and they honestly don’t believe she ever would. She typically relaxes a bit once everyone is in and seated, and after a while will lie down on her bed in the corner and chew on her Nylabone. Sometimes, if a guest gets up and walks past her, she will bark or growl briefly, and occasionally lunge towards them, but she never makes contact and stops when yelled at by Dave. Within an hour her hackles are gone and she is panting slightly. She is circulates a bit and approaches some of the guests, though she spends more time watching them than trying to interact. If a guest is standing and tries to lean over to pet her, she often growls a little and walks away.

On walks and outings, Sophie is alert to people–her hackles often go up–but a bit standoffish to those she does not know. If someone puts out a hand for her to sniff, she often ignores it, standing still next to Marcy or Dave. If the person pets her, she cowers slightly, yawns, licks her lips, and often moves away.

Marcy and Dave have a problem, even though they don’t know it. Sophie may be harmless when it’s the 3 of them, but she is stressed when guests come over and has no real idea what is expected of her. She will likely end up biting a guest at some point, either as they are entering the house or if they get up and move in her direction too quickly—especially if she’s on her bed, or if they try to pet her.

To dogs, the door where people–especially visitors–enter most often is a place with a high amount of stress attached. (Dogs are territorial by nature; this can be softened by proper socialization and training, and some breeds love people so much that their territorial instincts are diluted. Some breeds are less likely to display territorial aggression, and some dogs are just super-submissive and lack the confidence to be territorial.)

But doorways often create stress, whether it is happy stress (eustress) or unhappy stress (distress). Excitement peaks when guests come through the door, and this is where potential problems lie.

Dogs that are eustressed by guests often jump to greet them, lick or mouth them as they enter, weave about their feet, and beg for attention in sometimes obnoxious ways. Though these behaviors are motivated by acceptance, they can still be disconcerting to guests, and even dangerous. They are not meant to be aggressive, but can be perceived that way. Basic training with both rewards and calmly-delivered negative consequences can fix these pretty quickly and easily.

Dogs that are distressed by guests are more problematic. Their greetings can be forward, as Sophie’s are: the dog approaches the visitor and makes contact using her body, and investigates in close proximity. She is also unnerved by sudden movements, especially if she thinks they are directed at her.

(Distress can also take the form of what I call “avoidance and noise”: the dog does not move towards the visitor, but holds his ground, or backs away, barking and/or growling, hackles raised, eyes showing a lot of white, tail often down out of sight, or stiffly out.)

Some dogs take Sophie’s approach a step further, and put teeth on clothing or skin, in the form of mouthing or nipping, or full-on biting. This is the path Sophie is likely headed down, to be frank. The fact that she hasn’t put her teeth on skin or clothing yet does not mean she has ruled it out. In fact, you could say she’s warming up for it.

Why am I 90% sure that Sophie will bite a visitor in the not-too-distant future?

Because she is clearly telling this, in her body language, to anyone who will listen—and no one is listening.

Mailey E. McLaughlin, M.Ed. is the Atlanta Humane Society Behavior & Training Manager, and a Certified Dog Trainer Advanced/Professional Dog Training Instructor (CDT/CDTA/PDTI) through the International Association of Canine Professionals, where she is also Vice President of the Board of Directors. She has been working with people and their pets for over 34 years, teaching classes professionally for 17 years, and has built the Atlanta Humane Society’s training program from the ground up. She has years of experience working with shelter dogs and their owners. She is a member of the Association of Pet Dog Trainers, and a certified Pet First Aid Instructor. She believes training should be fun, fair, and results-oriented. Mailey is devoted to improving the relationship between pets and owners through calm, positive communication, not dominance. Since there is no “one right way” to train every dog, Mailey continues to educate herself professionally and has cultivated many approaches to problem-solving. In her spare time, Mailey enjoys recreational tree climbing, shooting, hiking, reading, and writing. Her personal blog is at http://www.carpek9.blogspot.com/

THANK YOU TO OUR CORPORATE CHAMPIONS